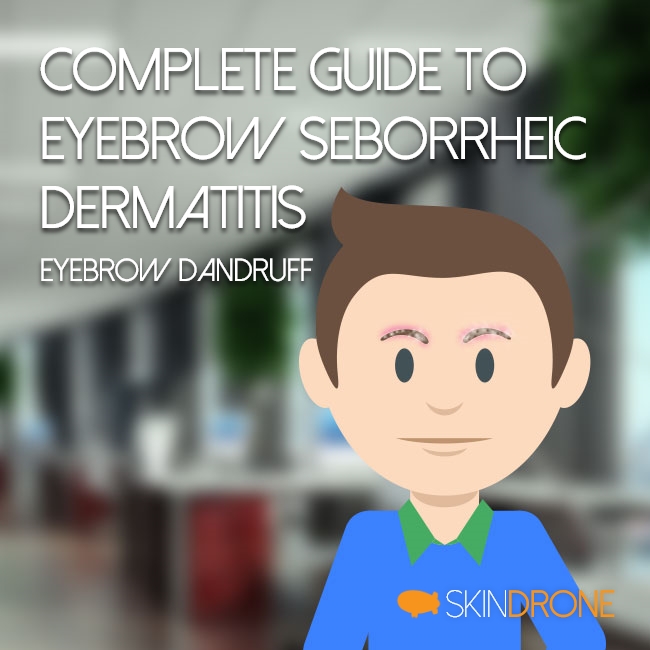 The ultimate guide to treating dandruff in eyebrows. What usually causes it, how to get rid of it, and everything else you need to know. All in one article.

Another great article after the last one! I have to respect how much effort you put on studying seb derm. You have way more knowledge about seb derm than most of the dermatologists.

In my opinion best thing has been Apple Cider Vinegar for eyebrows (so far). Steroids and topical antifungal creams have no effect and shampoos (selenium sulfide, ketaconazole) dry them out too much and I had horrible reaction with head and shoulders. Possibly conditioners could be better for eyebrows than shampoos. It’s really annoying to try different things as most of the times you can’t see positive results right away. It took me a week to realise that ACV is working and not making it worse. ACV is only ok for my facial skin otherwise, most effective on my eyebrows. Definitely recommended.

I’ve lost some of my eyebrows: thinning and shedding around 1-3cm area (inner sides). Not catastrophic yet but noticeable, hopefully ACV stopped it. I think seb derm also boost my male type hair loss in my scalp. I have a lot of thinning and shedding and I don’t really have clear hairline. Before I was able to cover most of the receding hairline as I have nice thick hair otherwise but not that well anymore.

3 years ago I (now 29years) went first time to see dermatologists for hair loss in my hairline. I got ketaconazole, finasterid/procepia, and minoxidil but didn’t really start using them cause my scalp condition got worse, more dandruff and drying. Same time I got redness, very slowly spreading my inner eyebrows and forehead. And now couple years later, still trying to find a cure and keep it under control lol.

I’ve now been 2 weeks on honey treatment. It’s now better than on the 1st week but not cleared up. I actually got better results just with ACV and taking sun but I will continue the honey treatment at least one more week just to be sure (tho I kept using also ACV for eyebrows). I didn’t combine coconut oil because it might feed the yeast. My face seems a bit dry/rough with honey so maybe I should try it. Sun is really good for facial skin but bad for my dry scalp. I live in Asia (thailand) and while I was surfing in Bali 6 months ago, I didn’t have any problem with my facial skin. I think most people would benefit taking sun for their seb derm. Tho usually seb derm areas will get more red at first but finally even out. Sunscreen is probably quite important. Somebody should definitely study which sunscreens are most suitable

One more thing beside taking sun (which i haven’t noticed in your articles) is Climbazole. Im actually using System 4 Scalp tonic (leave it on) (Climbazole, piroctone olamine, salicylic acid) and shampoo. Shampoo is still a lil bit rough, but not as rough as ketaconazole or selenium sulphide. Scalp tonic seems to be good especially for hairline. Might try it also on eyebrows. Probably gonna try your Andalou moisturising shampoo for scalp. I been thinking about trying castor oil and tree tee oil mix on my scalp and eyebrows in hope of reversing or at least stopping the hair loss. Any thoughts about that and how to apply them? That kind of combo shouldn’t be bad for seb derm itself.

I also think to start eating L-Glutamine. My immune system is very weak, maybe because of antibiotics and environmental reasons. Or unhealthy life style before, drinking etc lol. I already eat probiotics (lactobacillus), vitamins, omega 3 fatty acids and a lot of proteins. Now I try to eat even more healthy to see if it has any effect. Long message but any comments are welcome

I think that the fact that malassezia feed off of our natural skin oils, they will grow when fed by oils containing fatty acids in general, and not just from our body oils. Malassezia also produces fatty acids as metabolites that cause further problems. All this suggests that any products used for treatment, cleansing, or cosmetics should not contain any fatty acids because that will promote growth of these organisms. Because of this insight, I have personally avoided soap-based cleansers and use only glycerin soap. The delivery vehicle of medications should not contain fatty acids in its suspension. If they do, that may be why certain treatments become ineffective after a while. I also find that my condition flares up if I use cosmetics rich in fatty acids (anything with vitamin E should be avoided because it is suspended in oil) and with added sunscreen. So in my daily routine after I’ve controlled the growth of the organism using whichever method is most effective for me (mostly it is washing with a salicylic acid shampoo), I cleanse with glycerin soap, moisturize with an oil free product such as CeraVe PM, and avoid cosmetic products with fatty acids, especially those that have added vitamin E.

Federal fitness correct campaigns in the 20th century were initiated viagra without a doctor prescription and run beside elites more caring with defending against attacks from involvement business groups than with acclaimed mobilization, and grassroots reformers in the labor, cordial rights, feminist, and AIDS activist movements have on the agenda c trick concentrated more on current and incremental changes than on transforming the vigour misery arrangement itself.

This article (and related articles) frequently misuse the words “it’s” and “its”. For example, in the sentence “The majority of research attributes it’s effectiveness to it’s antifungal activity…” both occurrences of “it’s” should be “its.” “It’s” is a contraction of “it is,” which is incorrect in this example. You probably don’t notice these “minor errors” because you’re focused on the scientific correctness. Otherwise your articles are fantastic. I wish I discovered your website sooner.

Hi, I’ve been suffering from SD (scalp, nose and eyebrow) for a very long time. I tried almost everything on your and other’s blogs and only few things helped a little, but nothing worked long-term.

Then I got frustrated and threw away every shampoo, shower gel, shaving foam, every cream, ointments and I started to shower with clean water and SD from scalp disappeared in a matter of weeks. So I guess it was just an allergy. Nose cleared too, but eyebrows were a different story. It sure did help a little, the redness was weaker, but the dandruff was still there. I tried – again – everything I could find but nothing helped.

Then, few weeks ago, when I was looking for some eczema remedies, I came across a connection between eczema and liver function and found out that Carduus marianus (Silybum marianum) is great for restoring balance in liver. So I bought a tea with that herb and also bought some pills. Over first night, my eczema (after 3 months) was reduced by 50%, and the next day another 50% and so on. Now, after a week, not only the eczema is almost completely gone, but – and that’s the point why I’m writing this to your article – on top of that (besides that it almost completely healed my rosacea, which was already almost healed thanks to increasing my gastric acid levels + besides that dry scalp problems are gone too) – it even healed my eyebrows.

It’s a few days I didn’s see any single dandruff in my eyebrows. Some slight redness showed up though, but I’m sure it’ll disappear as well. So, you never know where the problem begins. I feel that after dealing with my stomach (after that – rosacea reduced by 70 %, sweating decreased by 50 %) and liver (eczema gone, rosacea almost gone, sweating decreased again) I still have something I need to fix, so I’ll try another organs and am curious how it turns out.

Anyway… that’s it, that’s tip from me – try Carduus marianus, maybe it’s your liver and in that case, no ACV or anything like that will provide long-term solution. However, if it is your liver, it’s really simple to balance them and you’ll see results almost immediatelly. So good luck to everyone.

I came to your site, as I started to research only because I developed seborrhoeic dermatitis seriously in the last two weeks, but reading your articles has made me understand that I have had it for much longer.
The first was a large amount of dry skin in my ears, and then the eyebrows, side of the nose and nowe across the top of the forehead.
It is very interesting reading your website and being informed by your research, as it has made me realise that the problem increased as I started using more healthy oils and fats in my diet as well as putting Argan oil in my hair.
I also used a moisturiser which contained vitamin E.
All these factors seemed to add to what has developed on my skin.
Thank you for all the information.

I just want to ask if Nizoral shampoo contains steroids? I just found out that there are “steroid shampoo” available in the market but I don’t want to use it. I use Nizoral once a week as maintenance.

I am an SD sufferer as well as a grammar fan. I noticed other errors besides “it’s vs. its” and if Michael A. is still posting about this subject (I just started reading his articles/posts today), I would be happy to help him edit his work for free. Also, it doesn’t hurt that I am a retired R.N. with a long work history that started with seventeen years in various infant ICU’s at a major children’s hospital followed by almost eight years of home care for children for the same hospital. I continued working with both children and adults in home care, including home and office-based IV infusions.

Sorry to hear you’ve had to deal with this frustrating skin condition. From my review, the primary Nizoral formula (1%) does not contain any corticosteroids.

Here are the ingredients for your reference:

Hope that helps.
Please let me know if you have any other questions.

I don’t know about other things but if your problem is with eyebrow dandruff know that: i virtually eliminated the problem with the following:

If you are one of the lucky few who only has SD on one area, that is likely to be it for you, the solution to your problems draws near. Alas, that is not my case at all, i have mad SD throughout my head and body, so it helps quite a lot but i’m not there yet, just the eyebrows and T area seems to benefit the most from this treatment.